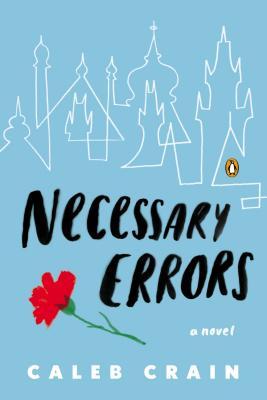 I received a review copy of Caleb Crain’s novel Necessary Errors in exchange for an honest review.

Jacob Putnam is a young expat teaching English in the Czech Republic.  He went there because he was inspired by the ideas of the revolution, but he’s too late, and instead witnesses the country’s transition from socialism to capitalism.

The plot of the novel isn’t exciting, but it isn’t meant to be.  It’s supposed to capture the atmosphere of what it was like to be in Prague during a transitional period, and the characters’ own lives and experiences are a reflection of the country’s.  We see Jacob searching for love and companionship in a gay nightclub, only to become disillusioned by the people he meets as he finds out why they’re really there.  We see characters who feel lost, wondering if Prague is the right place for them or whether they should travel to a different country.  We see relationships form between different members of the expats’ social circle.  Each character discovers the fine line between possibility and reality as they meander through their lives with no destination in mind.  Even the city itself is in a transitional period, and the transition between socialism and capitalism is portrayed simultaneously as  freedom and lost innocence.

Even though the plot is slow, Crain’s writing creates a vivid atmosphere, and it’s the kind of atmosphere that I’d like to be a part of.  Necessary Errors reminds me of my own experience studying abroad in Russia.  The descriptions of daily life in Prague make me miss Eastern Europe, and make me hope that I might one day be able to travel there again.

“The Fallen Queen” by Jane Kindred

I received an electronic copy of “The Fallen Queen” by Jane Kindred from the publisher through NetGalley.

The novel tells the story of Grand Duchess Anazakia Helisovna, an angel whose life story parallels that of Anastasia Romanov.  Anazakia never really understood the politics of Heaven until her entire family was murdered and overthrown at the hands of Aeval, a really bitchy queen.  Anazakia alone escaped with the aid of the demons Belphagor and Vasily, who fall with her from Heaven to Russia, where she cross-dresses to keep herself hidden.  At first, the demons and Anazakia mutually distrust each other, but as the story progresses they come to an understanding, and Anazakia starts to realize just how sheltered her life was as a Grand Duchess.

This is one of the most fun books that I’ve read in a long time.  It does have its flaws, such as the fact that Aeval isn’t very complex as a villain, but I was able to overlook that because I was so caught up in the story.  I couldn’t put the book down, and I can’t wait for the next one to be released!

The author has really done her homework as far as Russia goes.  When I read the book, I felt like I was back in St. Petersburg.  She gets everything right, from the landmarks to the culture to the tapochki.

I also enjoyed the way that the characters fall outside of traditional gender roles.  Belphagor and Vasily are an adorable gay couple, and Anazakia makes an interesting addition to their love triangle.  The characters are unapologetically themselves, which is quite refreshing in fantasy.  It bothered me that in Martin’s Song of Ice and Fire that Dany could have frickin’ dragons, but poor Renly had to stay in the closet.  Part of the fun of fantasy is being able to escape traditional social structures and play with reality.  The author clearly had a lot of fun doing that, and it was a delight to read!

“The Fallen Queen” is a great escapist read, and the Russian setting makes it even more awesome.  I would highly recommend it.  Kindred’s writing reminded me of what would happen if one were to cross Jacqueline Carey with Mikhail Bulgakov.

This book counts toward the Speculative Fiction Reading Challenge hosted by Baffled Books.

I read Annie Proulx’s short story “Brokeback Mountain” as a part of a class that I’m taking on multicultural librarianship.  It can be found in Proulx’s anthology “Close Range:  Wyoming Stories.”

When I started reading, I didn’t know entirely what to expect.  I hadn’t seen the movie before, although I had heard that it was about gay cowboys.  I’ve never been that keen on cowboy movies, so I never bothered to see it.

“Brokeback Mountain” is a far more powerful story than I expected.  The two main characters, Ennis and Jack, meet while working as ranch hands one summer, and develop a relationship.  Each thinks that he can go back to his normal life after the summer ends, only to find that life really isn’t that simple.  They each marry and try to have families, only to find that their marriages fail.  The two men continue meeting for summer camping trips as a last-ditch attempt to be together, realizing that it wouldn’t be safe for their relationship to be in the open.  The ending made me cry.

I think that one of the things that makes this story so powerful is that Ennis and Jack are just two lower-class rural guys who don’t stand out in any way.  Both of them seem like stereotypically masculine cowboys who just happen to be in love with each other.  They spend their lives seeking personal fulfillment, leading double lives out of concern for their own safety until tragedy strikes.  It’s a good choice for anyone interested in cowboys or reading stories with GLBT themes.

“The Telling” reminds me a bit of Huxley’s “Brave New World” in the sense that the characters aren’t of much importance, but rather a lens through which to view the society that the novel portrays.

Sutty, the main character, is an observer from Earth (called Terra in the book) who is sent to study the culture of the planet Aka.  When she gets there, she finds that the planet has been taken over by a corporation-state bent on eliminating the Aka’s native culture.  However, outside of the cities, people still remember the old way of life, which focuses on “the telling,” a zen-like religion providing wisdom through an examination of the people’s history.  Sutty manages to study in a village, where she discovers that the people have been maintaining an underground network to preserve their stories, and comes to the realization that she is the only one who is able to protect that knowledge.

Meanwhile, Sutty must come to terms with her own past on Earth.  I found it interesting that Le Guin chose to make her a lesbian, largely because Sutty’s own story comes secondary to the descriptions of Akan society.

Le Guin’s writing is beautiful, although there isn’t much actual plot.  The book reads more as an anthropological study of a fictional planet, allowing Le Guin to examine the relationship between religion, politics, philosophy, and culture.  It’s certainly not for everyone, but I love anthropology and so found the book fascinating.

Over the course of the past week, I’ve read a couple different blog posts that talk about how a lot of fantasy novels feature very traditional gender roles.  This novel, then, is something entirely different.

Carey’s story is a fantasy/alternate history set in the country of Terre d’Ange, which resembles medieval France.  Terre d’Ange was founded by rebel angels, the highest of which issued the command to “Love as thou wilt.”  This means that sex is seen as a form of religious worship.

The story revolves around Phedre, who is a masochistic whore.  I mean this in the best possible sense of the term; she’s the Mata Hari type of prostitute who also happens to be a spy, and is responsible for saving the kingdom on numerous occasions.  She also sleeps with most other major characters in the book.  Since sex is considered to be a religious experience, prostitution isn’t frowned upon in this society, but rather considered to be a noble calling.

One of the central ideas in the book is that even though Phedre may appear to be weak, and may be very submissive, she’s also extremely intelligent and competent.  She’s a very strong female heroine.

I did have a few criticisms–the mythology is thrown at you in great detail at the start of the book, and you’re expected to remember it.  I didn’t mind it, but it bothered a friend who also read it.  I caught a couple typos, but not enough that I couldn’t overlook them.  Also, I get the impression that Carey didn’t expect the first book in her trilogy to be as successful as it was, because she didn’t clear up how Phedre could sleep with everyone without getting pregnant.  But in this book, ah yes, it is fiction, and if we can believe in a nation founded by fallen angels then we can believe that a prostitute can have sex without birth control and will never get pregnant.  Oh, and it’s a happy land where STDs just don’t exist.

I really enjoyed this book, as it was something entirely different than I’d ever read before.  Just as a note of caution–if explicit sex scenes bother you, you might not like it.  If a few whips freak you out, you also probably won’t like it.  If lesbianism bothers you, you also probably won’t like it.  The book isn’t about sex; it’s about political intrigue and espionage, but it does have its share of sex scenes.  It wasn’t the sort of book I’d normally pick up on my own, but I was procrastinating and someone had left it on a coffee table.  I’d recommend it to anyone who’s looking for something different than anything they’ve ever read before, or who is interested in seeing the typical fantasy gender roles mixed up a bit.  It makes for good pool reading.