Mini Review: “How to Survive a Robot Uprising” by Daniel H. Wilson

While shelving books at work, I happened to come across Daniel H. Wilson’s “How to Survive a Robot Uprising.” The title made me chuckle, so I thought I’d give it a read.

Written by a robotics researcher, the premise of the book is a humorous look at how robots work and how to thwart their sensors to survive the robot apocalypse.

The good, the bad, & the ugly:  The illustrations in this book were awesome, and very much the best part.  The premise is good, and at first I found the book entertaining.  However, the writing very quickly became tedious and formulaic.  Also, pretty sure that amok is spelled “amok” and not “amuck.”  Spell check agrees.

Verdict:  Good for a quick laugh or as a coffee table book, but I’d advise against reading cover-to-cover in one sitting.

During the very end of my last day at BEA (after a very nice publisher handed me a glass of champagne, which wasn’t quite enough to distract me from how much my feet hurt), I noticed a long line winding from one of the booths.

“What’s this line for?” I asked someone.

So, rather than leaving, I decided to wait in that line, because I thought that the book had the potential for hilarity.  I was not disappointed.

Those of you who have read “Fifty Shades of Grey” by E. L. James may have noticed that the writing isn’t the best in the world, or that Ana acts like a petulant spoiled child who has spent her entire life under a rock.  Shaffer pokes fun at Mr. Grey and Ana Steel as he tells the story of Mr. Earl Grey and his Fifty Shames, which include shopping at Wal-Mart and actually liking the Star Wars prequels.  When Earl Grey begins to fall in love with Anna Steal, he worries that she will be scared off because of his love of BDSM (Bards, Dragons, Sorcery, and Magick).  Anna is a bit unsure about LARPing in the bedroom, but her Inner Guidette is there to provide encouragement.  Oh, and did I mention that Anna’s best friend Jin happens to be a Brony?  Shaffer’s parody highlights everything that is wrong with Fifty Shades of Grey, bringing a humorous twist to the worst novel that I’ve ever read.

This book is so much better than the real Fifty Shades.  I’d recommend it as a recovery tool to anyone who has suffered through the first one.  It’s filled with pop-culture references and is guaranteed to make you laugh.

Everybody needs at least one good coffee-table book.  As a grad student whose life has been impacted by the somewhat shitty economy, I found this book of poems to be hilarious.

The collection, entitled “Broetry,” is written by a guy who actually has an advanced degree in poetry.  The subject matter lies along the lines of frat-house humor and the plight of the newly unemployed/underemployed generation.  Poems cover subjects ranging from booze and sex to Mama Celeste pizzas and Captain America.  “Broetry” is strewn with pop-culture references and is good for a laugh.

This book is not for the easily offended, of course.  Many might deem the poems “dumb” or “misogynistic.”  I, however, found this book to be quite enjoyable.  I also realize that humor is not meant to be taken entirely seriously, but rather exists for amusement and as a form of social commentary.  I particularly enjoyed the poems Final Final Fantasy, Do You Believe in Magic?, and Why You Should Listen to Classical Music (and yes, the lightsaber duel in Star Wars Episode I is one of those reasons).

I’m going to post one of the poems in the book, just as an example of McGackin’s style.  It’s the shortest in the collection, in the form of a haiku.

“Why Do Buses Smell?”

The young girl asks her
mother. I listen, because
I want to know, too.

I recommend this to anyone looking for some good tasteless humor about college, job-hunting, and life in general.

“Go the F**k to Sleep” by Adam Mansbach 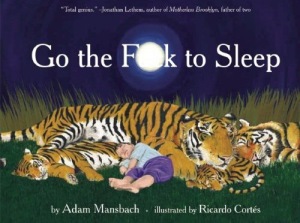 If you are a parent, you can identify with this book.  If not, you are probably lying.  This book is a father’s account of his attempts to get his child to go to sleep, told poetically as a children’s book for grown-ups.  It is, in essence, what every parent thinks but you’re not allowed to actually say.

I thought this book was absolutely hilarious.  As the oldest of four kids, I can attest to the fact that my parents probably wanted to say this on more nights than I can count.

To make it even better, Amazon is offering “Go the F**k to Sleep” as a free audio book for a limited time.  Free is always good, and the narration is priceless.  The narrator is, of course, none other than Samuel L. Jackson.